“Not thinking about anything is Zen. Once you know this, walking, sitting, or lying down, everything you do is Zen."
- Bodhidharma

Legend has it that…. 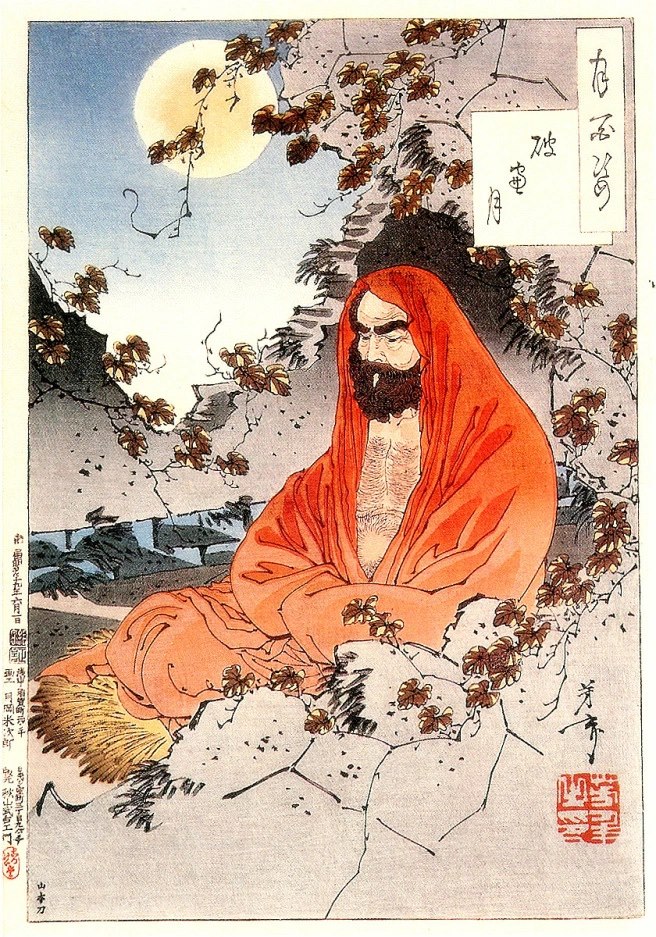 Over one thousand five hundred years ago in China, there lived an emperor named Wu. He was a great patron of Buddhism and he dearly wanted a great Buddhist teacher from India to come and spread the message of Buddhism. He set in motion elaborate work to see that Buddhism spread to the people of his land. These preparations went on for many years and the emperor waited and waited, but no teacher came.
Then one day, when the emperor was over sixty years old, a message was sent across that two great, fully enlightened teachers would cross the Himalayas and come and spread the message in China. There was great excitement and the emperor prepared a big celebration in anticipation of their arrival. After a few months of waiting, two people appeared at the border of the Chinese kingdom. They were Bodhidharma and one of his disciples.
Bodhidharma was born a prince in the Pallava Kingdom in South India. He was the son of the king of Kanchipuram, but at an early age, he left his kingdom and princehood and became a monk. At the age of twenty-two he was fully enlightened, and that was when he was sent as a messenger to China. The moment the news of his arrival came, Emperor Wu himself came to the borders of his empire and set up a huge reception and waited.
When these monks came, weary from the long travel, Emperor Wu looked at the two of them and was greatly disappointed. He was told that an enlightened being would be coming and was expecting something, but this was a mere boy of twenty-two years. Worn by the travel of a few months in the mountains, Bodhidharma was really not looking very impressive.
The emperor was disappointed, but he contained his disappointment and welcomed the two monks. He invited them into his camp and offered them a seat and food. Then, at the first opportunity he got, Emperor Wu asked Bodhi Dharma, “Can I ask you a question?”
Bodhidharma said, “By all means.”
Emperor Wu asked, “What is the source of this creation?”
Bodhidharma looked at him, laughed, and said, “What kind of foolish question is that? Ask something else.”
Emperor Wu was extremely offended. He had a whole list of questions to ask Bodhidharma, questions that he thought were deep and profound. He had held many debates and discussions about this particular question, and now this fool of a boy who came from nowhere just dismissed it as a foolish question. He was offended and angry, but he contained himself and said, “Okay, I will ask you a second question. What is the source of my existence?”
Now Bodhidharma laughed even louder and said, “This is an utterly stupid question. Ask something else.” If the emperor had asked about the weather in India or about Bodhidharma’s health, Bodhidharma would have answered. But this man was asking, “What is the source of creation? What is the source of who I am?” He brushed this off.
Now Emperor Wu became really angry, but he contained himself and asked the third question. He made a list of all the good things that he had done in his life – how many people he had fed, how many things he had done, all the charity that he had given and finally he said, “To spread the dharma, to spread Buddha’s message, I have built so many meditation halls, hundreds of gardens, and trained thousands of translators. I have made all these arrangements. Will I get mukti*?”
Now Bodhidharma became serious. He stood up and glared down at the emperor with his huge big eyes and said, “What? You! Mukti? You will burn in the seventh hell.”
What he meant was, according to the Buddhist way of life, there are seven layers of the mind. Instead of just doing what is needed, if a man does something and then keeps accounts of it, “How much I have done for somebody,” he is in the lowest level of the mind and he will inevitably suffer because he is expecting people to be nice to him in return for his deeds. If they are not nice to him, he will be mentally tortured, and it will be a seventh hell.
But Emperor Wu did not understand any of this. He flew into a rage and threw Bodhidharma out of his empire. For Bodhidharma, it made no difference – in or out. It doesn’t matter whether it is a kingdom or a mountain; he carried on with his journey. But Emperor Wu missed the only opportunity of his life.
It was Bodhidharma who brought Zen to China. Gautama the Buddha taught Dhyan** or meditation. Hundreds of years later, Bodhidharma transported Dhyan to China where it became Chan. This Chan went further down to Indonesia, Japan, and other far east Asian countries, where it became Zen.
After he was sent out of the empire by Emperor Wu, Bodhidharma went into the mountains. There he gathered a few disciples, and they would meditate in the mountain caves. For a meditator, the biggest enemy is sleep. The legend says that Bodhidharma once fell asleep while in meditation and was so furious that he cut off his eyelids. His eyelids fell to the ground and became the first tea plant. Tea was thereafter supplied to the monks as a protection against sleep.

*Mukti is the several forms of emancipation, enlightenment, liberation, and release. It refers to freedom from ignorance: self-realization, self-actualization and self-knowledge.
**Dhyan is the study of deep concentration, calmness and tranquility of the mind. Meditation.