Zen Wing Chun seeks to build a healthy atmosphere of cooperation, respect, and harmony among all members. Because the Wing Chun system is an amazing martial art, people who follow different lifestyles enjoy it. It’s everyone’s responsibility to create a positive and welcoming environment where people of all sizes, shapes, ages, and beliefs feel encouraged in their learning. We are, besides a school, a family.
In Wing Chun Kung Fu, separating the concept of family from the martial arts practice causes a significant loss in the learning process since it’s in the culture and tradition where lies the understanding of the art. We consider ourselves Kung Fu brothers and sisters as it has been done for many past generations; we descend from the same lineage, motivated by the same purpose: developing Kung Fu.
Within this atmosphere, we build strong bonds and true friendships that go beyond the limits of the school’s walls. 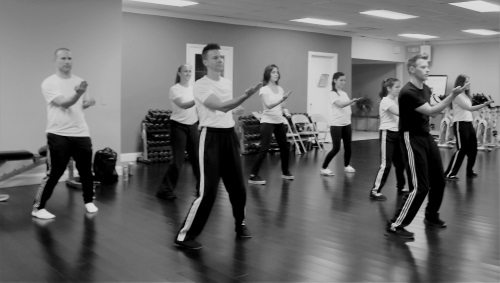 Wing Chun is a complete and well-balanced system where its forms and exercises have a defined sequence to be followed and learned. The sequencing was designed in a way that all exercises have a harmonious relationship with one another. Training Wing Chun following the established training progression requires patience, dedication, and commitment since each exercise learned becomes the foundation for the next one. Thus, the practitioner just moves on to the next exercise after they gain a reliable skill in the previous exercise. The time one takes to go from one stage to another is individual and it depends on their ability to absorb and understand the concepts and principles regarding the exercise, and also their skill to perform it.
There’s no grading system such as colored belt, sashes, badges or certificates. Grading system in Wing Chun is a western invention to satisfy westerners’ need for rank advancement. They may work as trappings of the ego and are irrelevant when the individual is capable of being honest with themselves and don’t rely on visual clues to tell others what level they are at. The evidence of one’s skill should be on them, not on a piece of paper or piece of clothing they wear.
The forms and exercises of Wing Chun can be considered as a personal grading system. When a section of a form, a new form or a new exercise is taught, one can know they are advancing, besides the verbal feedback on their progress one receives during training. Instructors will move the student up to the next degree when they are ready for it; there are no tests involved.
Classes are not held in a strict or inflexible way. However, they usually consist of the practice of Wing Chun forms, exercises that are always performed with a partner, in addition to oral information about the system, tradition, and culture given by the instructors in a conversational manner.
There is no practice of physical exercise unrelated to Wing Chun during classes.
There is no use of protective gear since the exercises are not violent and are practiced respecting the limitations of each student.
The uniform consists of a Zen Wing Chun T-shirt, pants, and Chinese sneakers.
Private and group classes are available.