Transmitted orally by Ip Man who, in turn, had also heard it from his masters, the best-known legend about the origin of the Wing Chun system has no written documents or records to prove the truth of the facts.

Be that as it may, legend has it that... 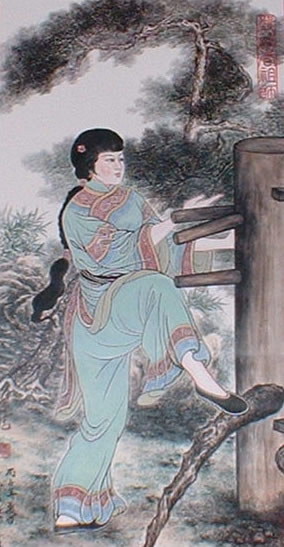 Yim Wing Chun was an intelligent, hardworking and honest young woman. Her mother died shortly after she had been betrothed to Leung Bok Chau, a salt merchant. At the age of fifteen, according to Chinese customs at the time, she wore her hair tied, showing that she was fit to marry. Her father was Yim Yee. At the foot of Mount Tai Leung, they made a living in a small trade, like tofu vendors.
When China was invaded by the Manchu, surviving rebels of the Ming Dynasty hid in the Shaolin Temple seeking protection. The rebels trained in secret, inventing new ways to fight. At that time, Buddhist temples were revered by the people, and martial arts were practiced there. This aroused the fear in the Manchu government, to such an extent that troops were sent to destroy it. However, the attacks were not successful since the temple buildings were robust and invading it was practically impossible.
Then, three officers of the Manchu government, seeking recognition, suggested a plan. They conspired with a lower-ranking Shaolin monk and his disciples, who set fire to the monastery and opened its doors allowing the Manchu soldiers to enter. Thus, many of the monks and disciples died or fled. Five Elders managed to escape and took separated paths; one of them was Buddhist nun Ng Mui.
Ng Mui took refuge in the Temple of the White Egret on Mount Tai Leung. There, she used her time to synthesize a new fighting system to better suit a woman or other fighter who did not have the advantage of size and strength. At the foot of Mount Tai Leung, she met Yim Yee and Yim Wing Chun, from whom she used to buy tofu when she went down the hill to go to the market.
One day, the beauty of Wing Chun caught the eye of a local warlord who was famous both for his ability to fight and for being of bad character. He wanted Wing Chun to marry him. Upon being refused, the warlord threatened her by saying that he would take her by force.
Ng Mui learned of the incident and felt sympathetic for Wing Chun. The story awakened her sense of justice. However, instead of driving the warlord out of the area, which would make her be recognized and would drag the Manchus' attention, Ng Mui opted to teach Wing Chun her fighting techniques, so she could protect herself. Thus, Wing Chun followed Ng Mui up into the mountains, where they trained tirelessly until she knew how to employ the system with proficiency. She came back and challenged the warlord to fight and managed to defeat him.
Ng Mui later traveled throughout the country. Before leaving, she asked Wing Chun to continue developing the system to help people, who were working to overthrow the Manchu government, restore the Ming Dynasty. After that, Wing Chun devoted herself entirely to structuring the new method she had learned from her master.
Later, she married Leung Bok Chau, the fiancé who had been reserved for her as a child. Leung Bok Chau was already a martial artist before marrying Wing Chun. After marriage, she would see him practice. She started making suggestions about certain techniques and discussing martial arts theories with him. At first, he paid little attention to those suggestions; he considered himself a reasonable fighter and did not see how a frail woman like his wife could know anything he did not already know. Over time, he noticed her observations were pertinent and encouraged her to fight. He was defeated by Wing Chun with ease, although he was using his best technique. Surprised by this result, he repeated the experience several times and all attempts ended the same way.
Thereby, Leung Bok Chau realized that his wife was not as fragile as other women. She was a powerful fighter with great skill in an unknown martial arts system of extreme fighting efficiency. Leung Bok Chau began to admire his wife martial arts system and started practicing it. The system didn't have a name, so he named it "Wing Chun" honoring her and began to spread the art.